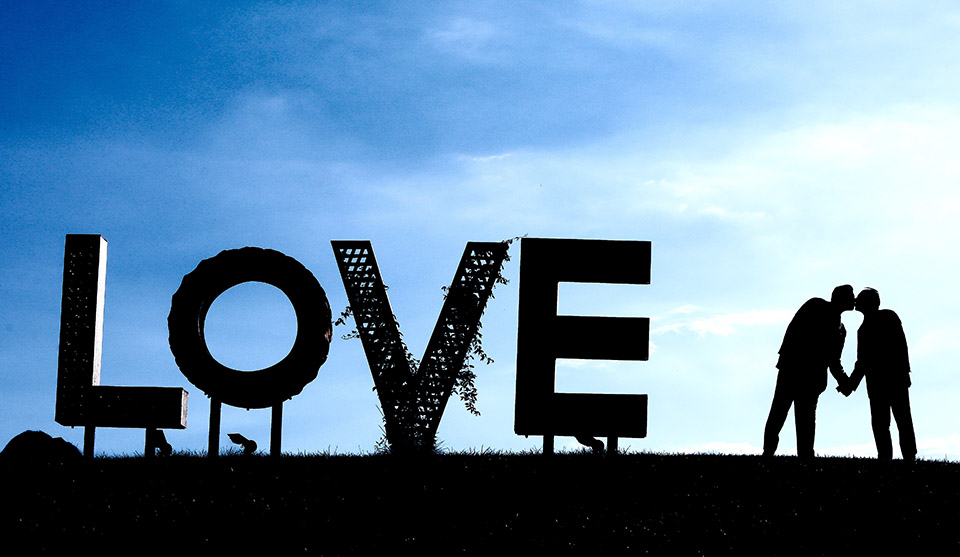 Kenneth and Kevin were married recently at Airlie. This is an amazing venue located on 300 secluded acres in the foothills of the Blue Ridge Mountains in Warrenton, VA. It is used for retreats, conferences, weddings, and much more I’m sure. I had never shot a wedding here, but did scout it out with Ken a few weeks before the event.  When I saw the word “LOVE” spelled out in large block letters up on a hill, not far from the garden where the wedding ceremony would be held, I knew we were going to use this prop in an image…somehow.

The clients had told me about this LOVE sign during our initial meeting months earlier, so I knew they were excited about it as well. Traditionally newlyweds will carve their initials on a lock and fasten it to the letter “E”. It is a photo op that surly one hundred percent of other photographers who have worked a wedding here have shot. Those same photographers likely have also staged portraits near the oversized letters. It’s a no-brainer and I was going to do it too. But I pride myself on not being like other photographers.

I had been thinking for days about a unique way to make a portrait of my clients that would incorporate these letters. I had a few ideas but hadn’t made any concrete decisions. Ideas will often come to me as I shoot, so I wasn’t worried. But when it came time to do those photos we suddenly only had a few minutes to get it done…and the light was awful. Direct and  blazing sunlight behind the letters with no cloud in sight. It was literally the worst light imaginable for portraits. Returning to the hill in better light closer to sunset wasn’t an option. It was now or never.

It quickly occurred to me that a silhouette was the way to go. I already had plenty of intimate portraits of Ken and Kevin from earlier in the day, so not a big deal if they were silhouetted here…and awful backlight is always good for this kind of thing. My second shooter, Ana, positioned herself just out of frame and gave the guys some great direction. I shot with my Canon 5D Mark III and 70-200mm @ 2.8 lens (focal length 70mm), f/8.0, 1/4000 second, ISO 200). I increased contrast and saturation slightly during post in Lightroom.

The lesson here: Sometimes the very thing that is hurting you the most can actually work to your advantage. All you have to do is think differently.