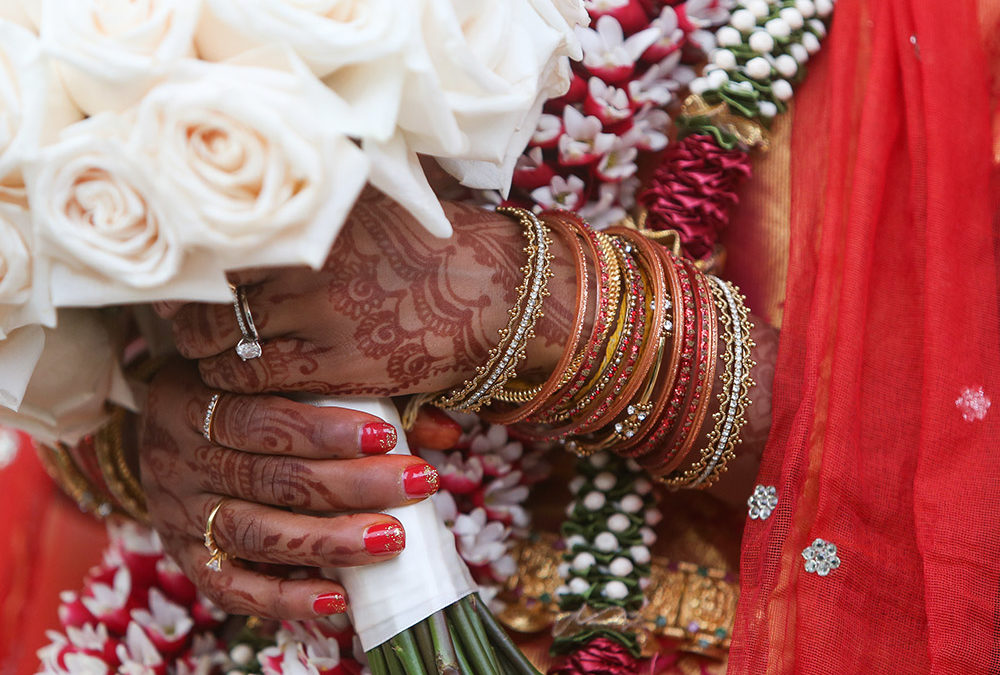 I’ve been fortunate enough to photograph hundreds and hundreds of weddings. Whether a backyard celebration or a formal church ceremony, Jewish or Catholic, gay or straight, they are all wonderful and unique in their own way… but some leave more of an impression than others. I’ve done lots of Indian weddings, but Colin and Srujana’s recent ceremony in Loudoun County’s Wine Country caught me by surprise.

Colin has an American-Taiwanese background. His dad, an American Air Force pilot, met his mom while he was stationed in Taiwan in the 1970’s. Srujana was born in the state of Andhra Pradesh, in the southern part of India. She moved to America with her Indian family when she was just four years old. Colin and Srujana met during their graduate school internship at Georgetown University.  After learning about their wedding from Visit Loudoun, I got to know Srujana and Colin during our engagement session at Soleado Lavender Farm.

I was excited when they told me they were planning a Hindu wedding and that it would take place at the picturesque Harvest House at Lost Creek Winery. (Later I learned that, more specifically, it was a traditional Telugu ceremony).

Srujana and Colin were adorned in traditional clothing, jewelry, and henna. As she walked down the aisle with her family, she was hidden from her soon-to-be husband by a cloth, which in Telugu is called an Adduthera. Once she reached the altar, the couple continued to be separated by the cloth for some time. This separation signifies their individual lives and existence prior to marriage. The ceremony proceeded and the couple, surrounded by family members, was led through many important rituals. The pujari, or Hindu temple priest, wore a wrap on his upper body that left part of his bare chest and shoulder exposed, and his face was decorated with streaks of color. He said many things that I couldn’t understand. From time to time he would attempt to translate with broken English, which many found to be amusing. The ceremony was abbreviated for time and scheduling reasons, which was a good thing considering that it began to rain.  The weather however did not dull anyone’s spirits. We were still in a unique location adjacent to beautiful vineyards. I was optimistic that a rainbow could be in our near future.

While the bride and groom were sheltered under their elaborate altar, friends and family used umbrellas, wedding programs, and hand-held fans to stay dry. Everyone, including my fearless second photographer, Marlayna, took the rain in stride. Guests continued to smile and enjoy the festivities. An elderly man saw me struggling to protect my camera from getting wet. He placed himself behind me and, without saying a word, held an umbrella over my head. I gave him a quick look of appreciation and started to thank him when my attention was quickly pulled back to the ceremony.

Things were happening quickly now.  The cloth separating Colin and Srujana was removed, which signifies two souls becoming one. They took turns dumping rice and rose pedals onto one another. Small amounts at first, but gradually more and more. This talambaralu ritual symbolizes the sharing of happiness, health, harmony, and wealth with one another. Guests laughed and pointed as Srujana and Colin were covered in food and flowers. I had never seen anything like this before. My immediate instinct was to slow my shutter down to 1/125 to achieve some motion blur on the rice. I shot and shot. The friendly man continued to shelter me with his umbrella.

People walked around. They socialized. The ceremony went on and on, one ritual as fascinating as the next. I’m leaving out many details, but if you are ever invited to an Indian wedding I would suggest accepting the offer.  The rain continued.

Later, as we shot group formals under the covered porch of the main house, the clouds gave way. Our rainbow had arrived. I wasted no time getting Colin and Srujana down to the vineyards for what would be another amazing photo opportunity.

Please enjoy some of my favorite images from this magical day. 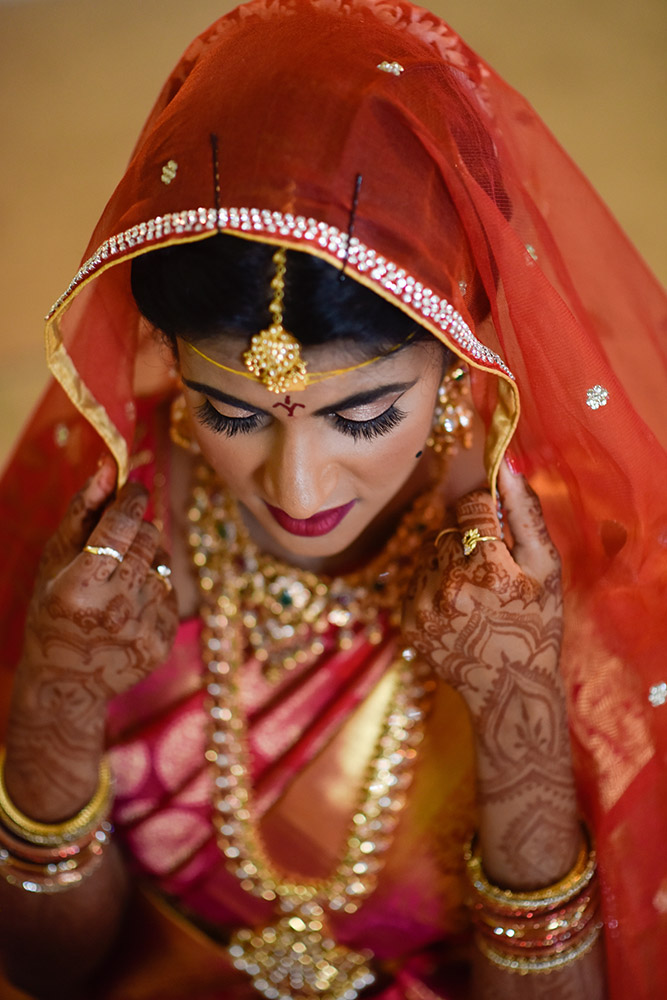 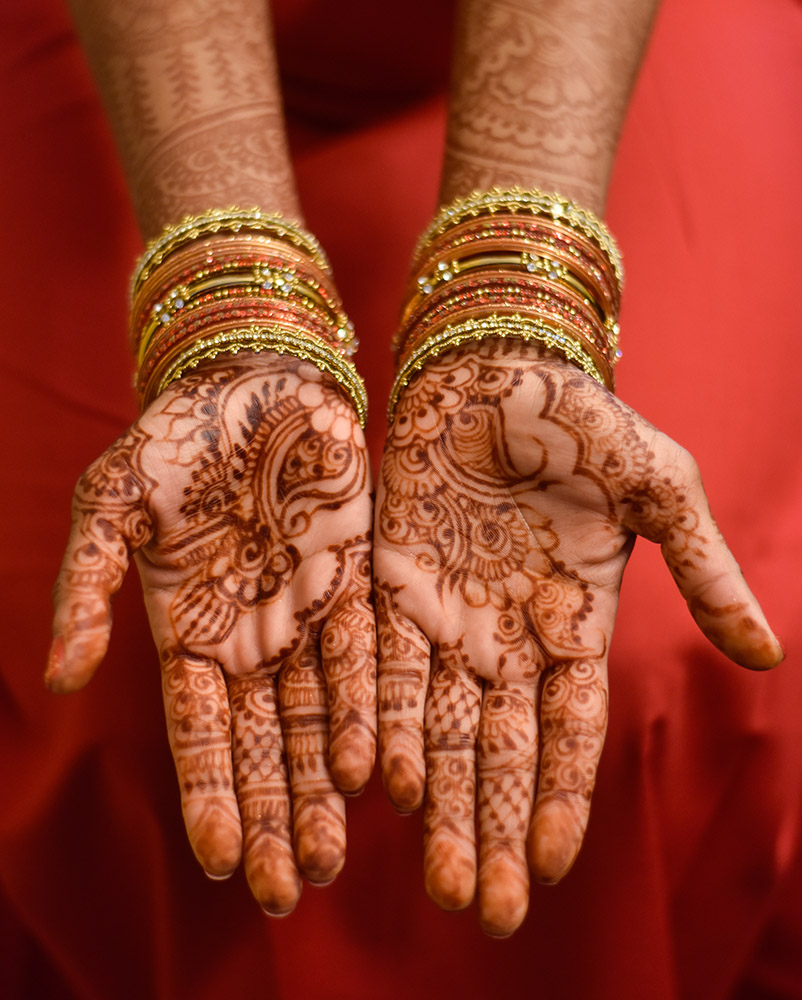 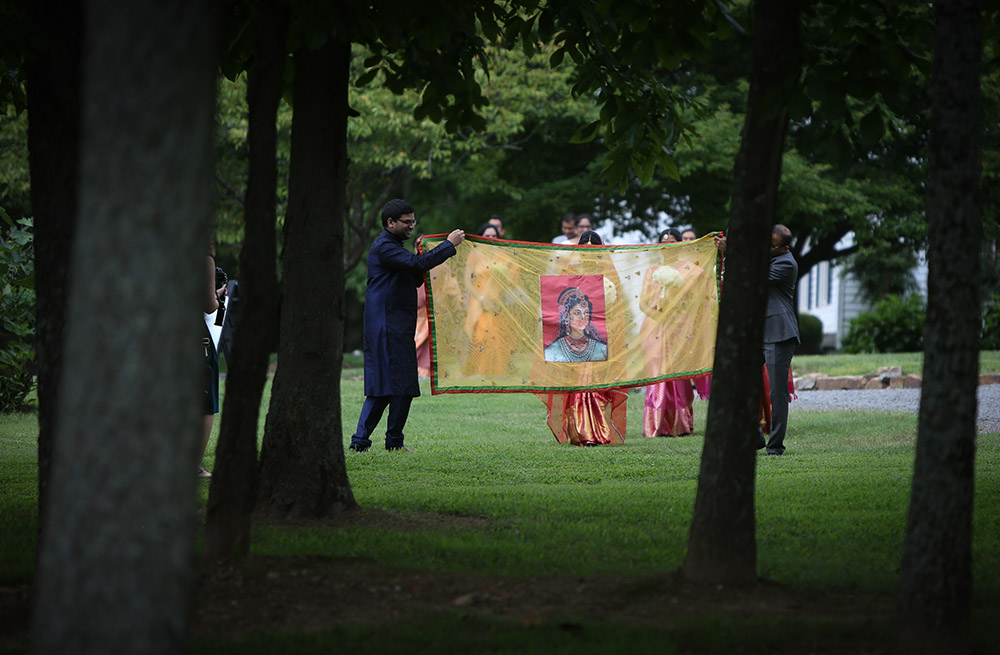 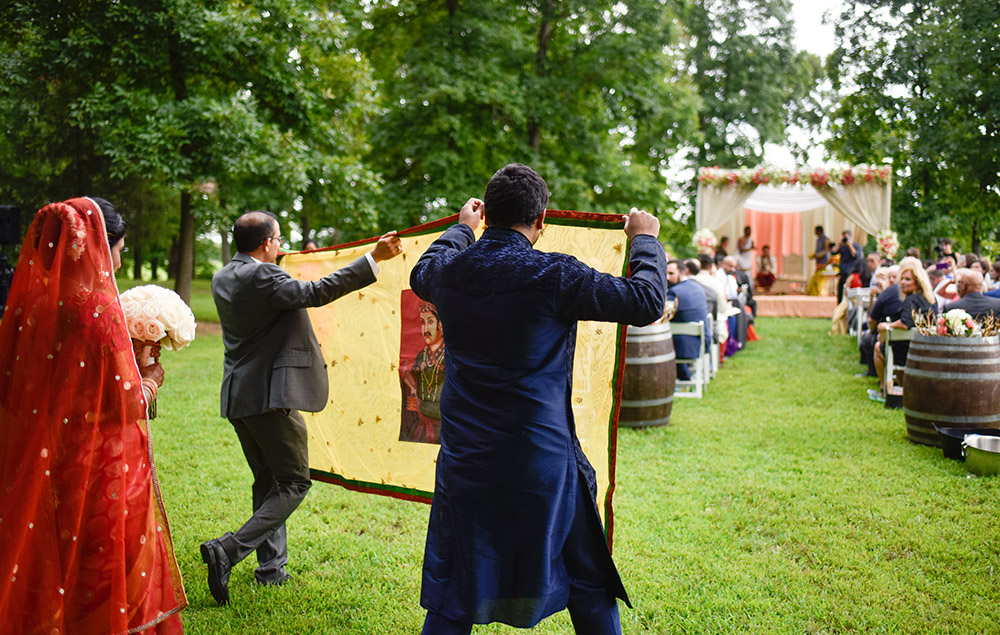 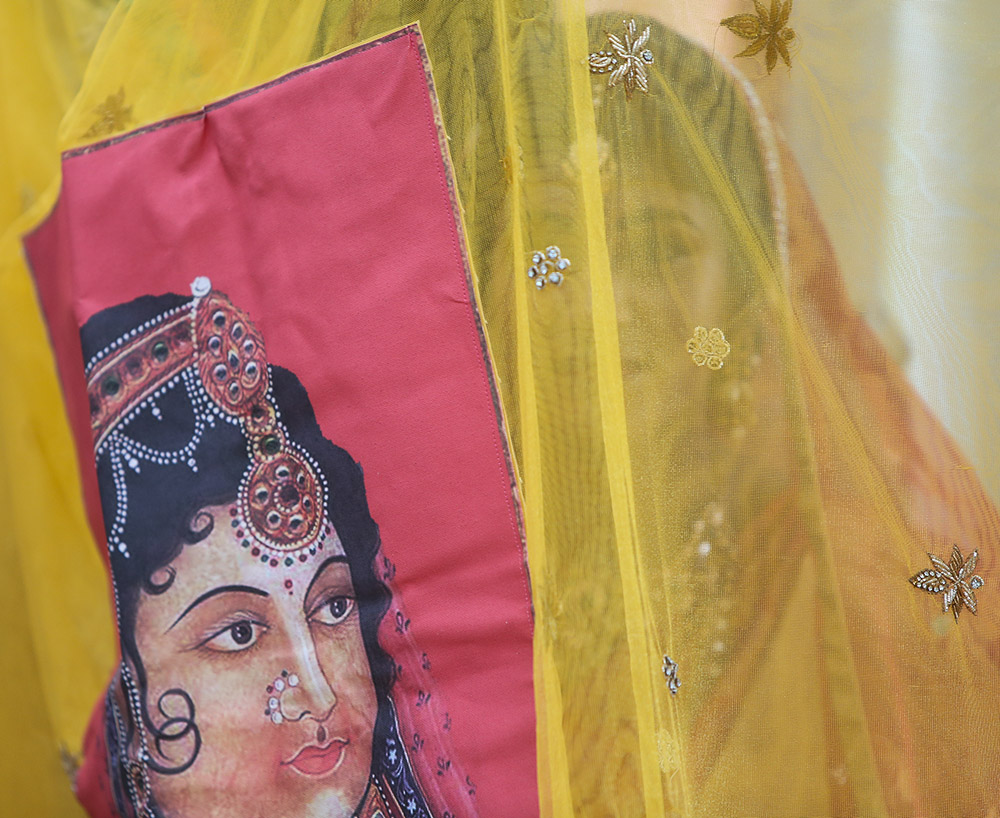 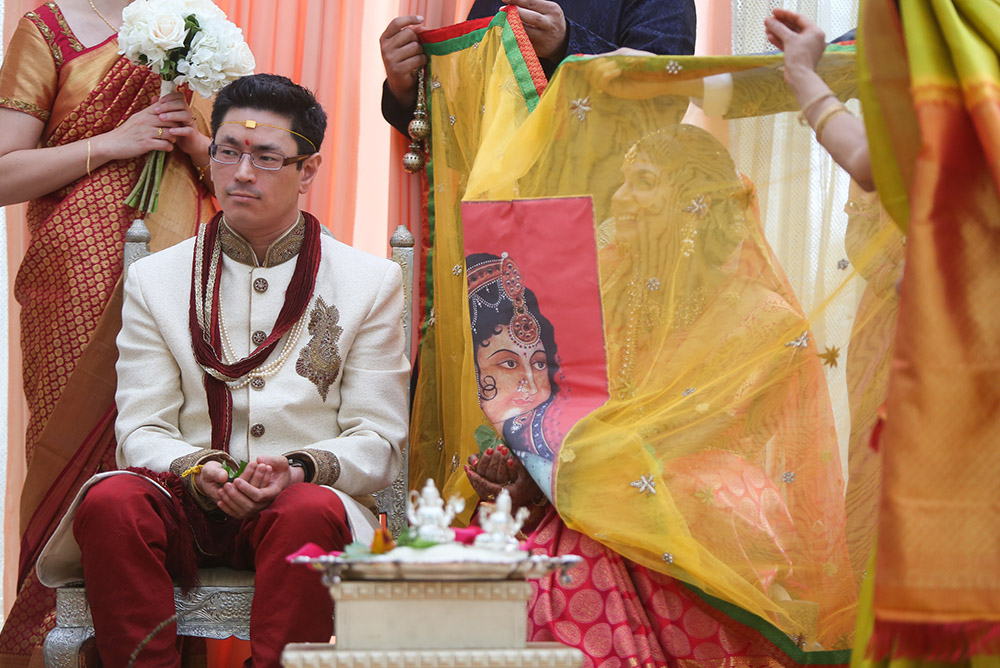 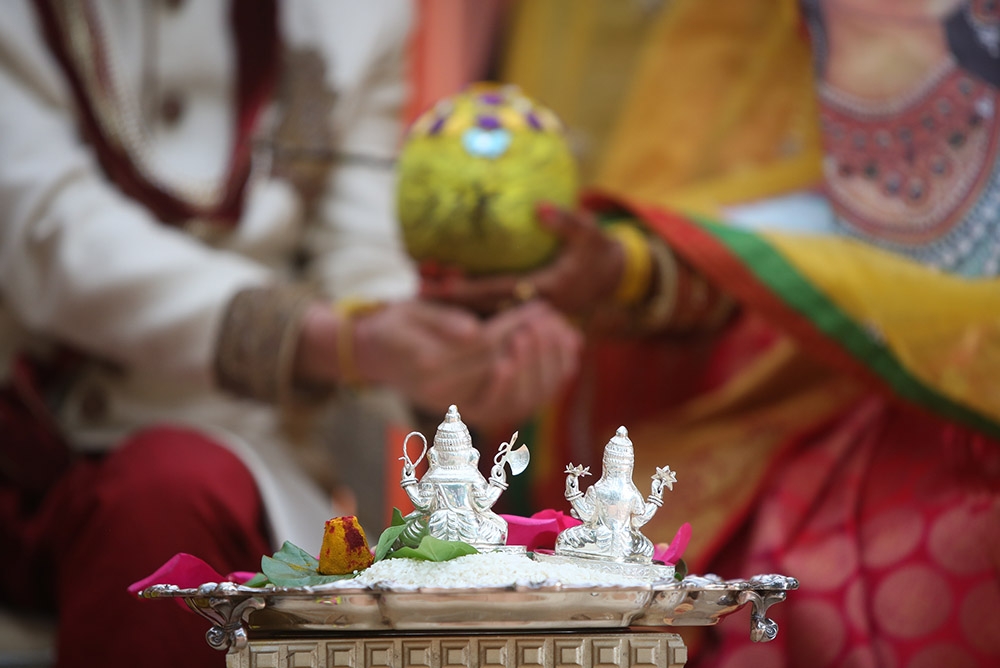 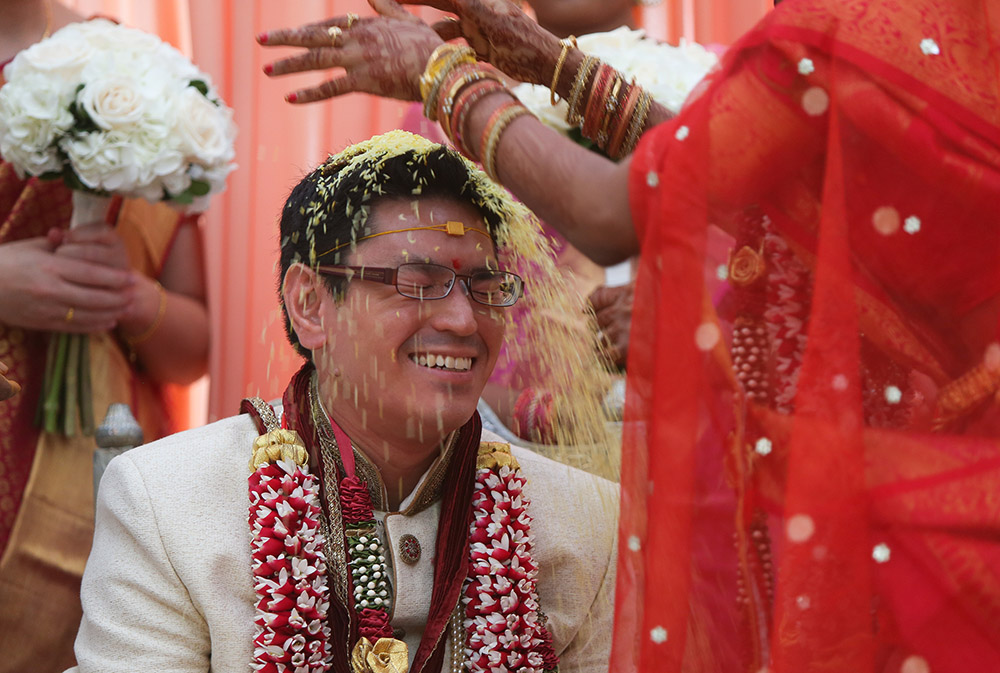 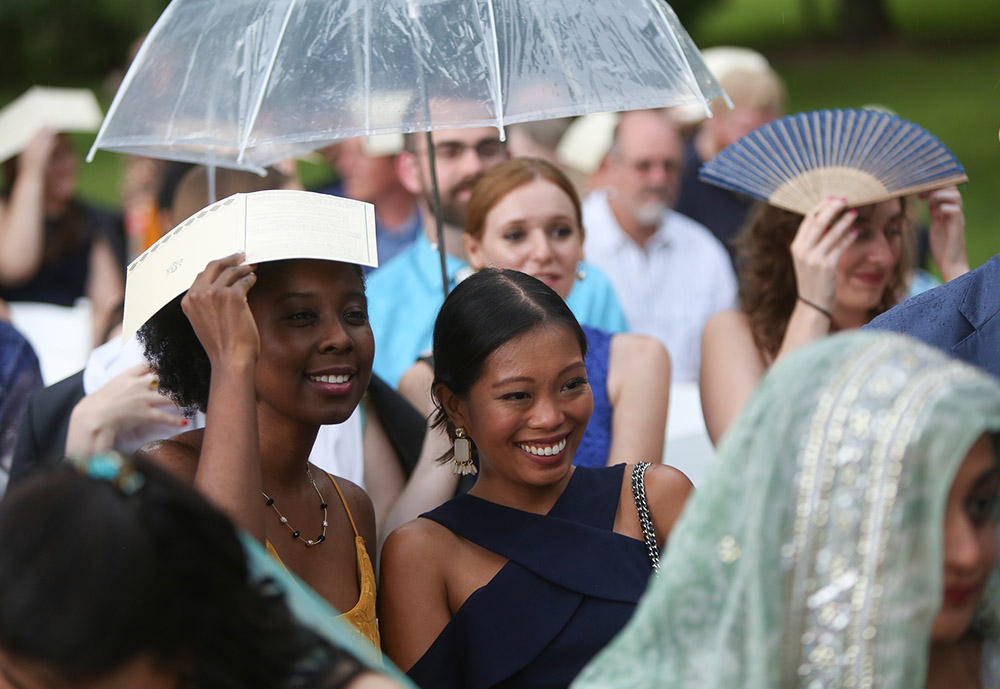 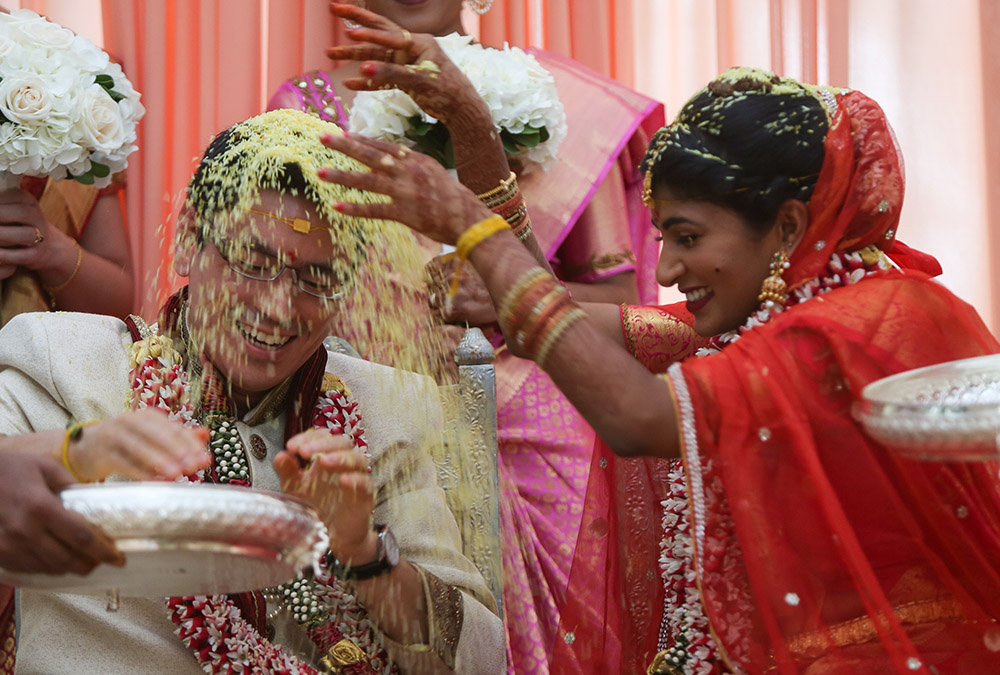 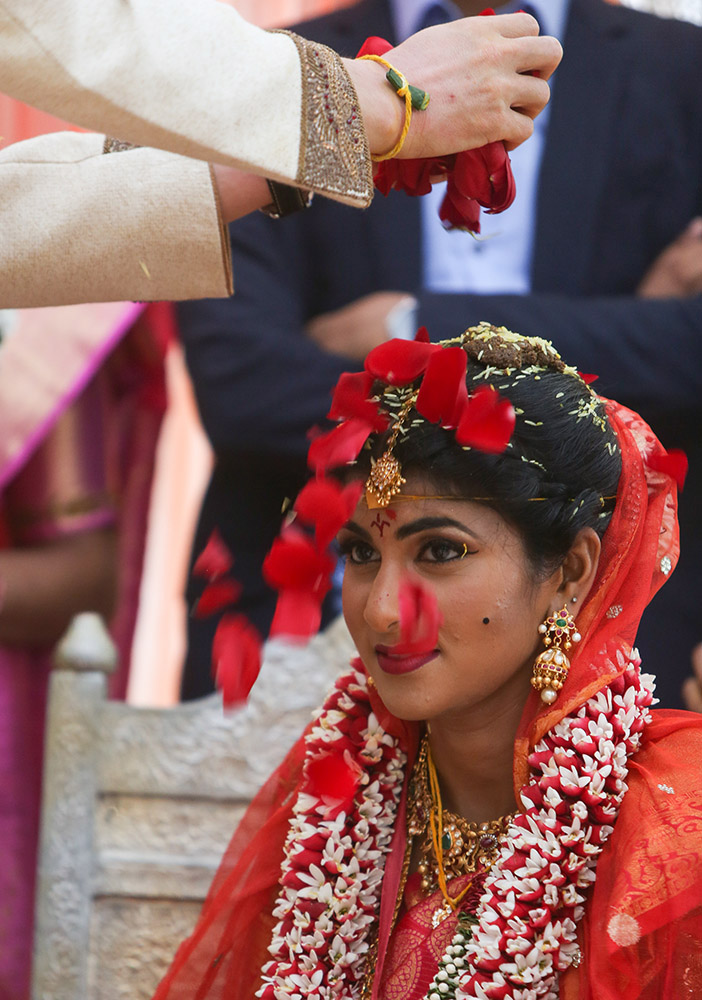 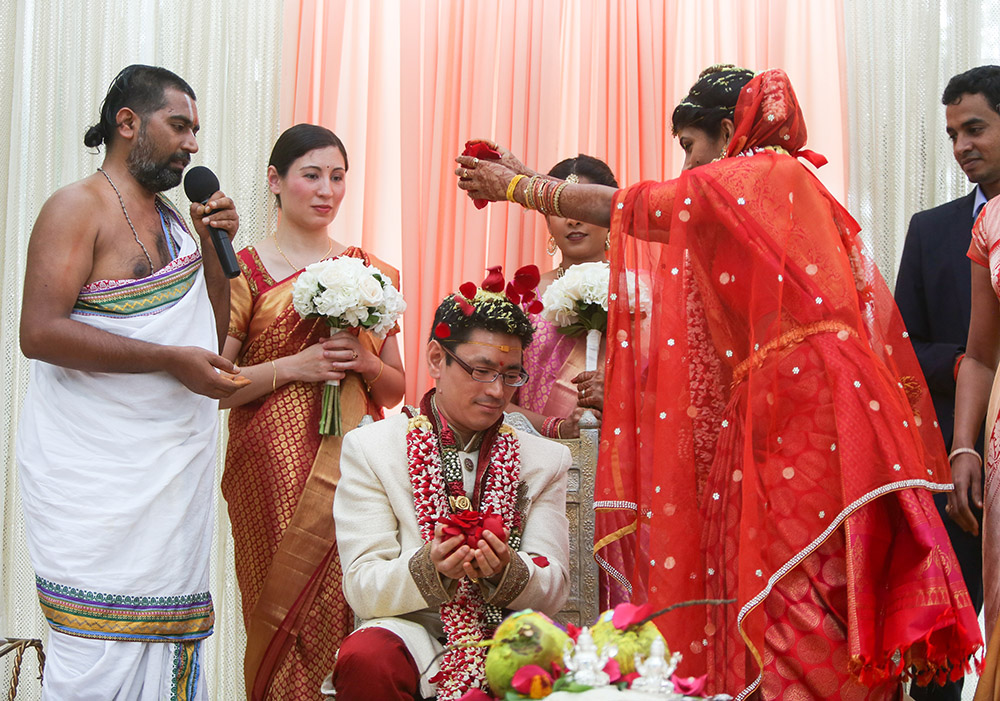 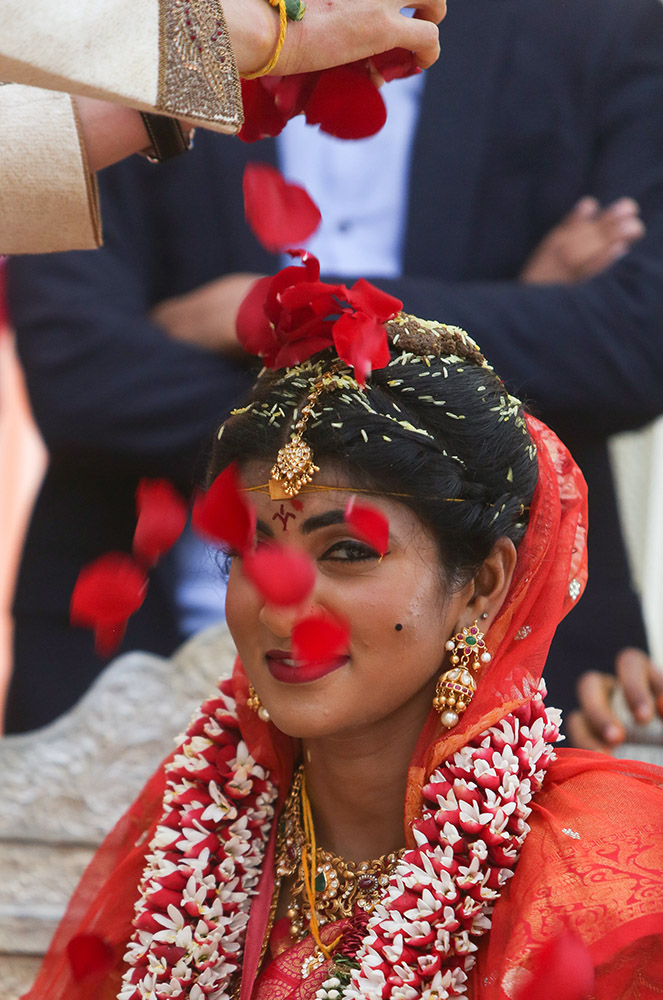 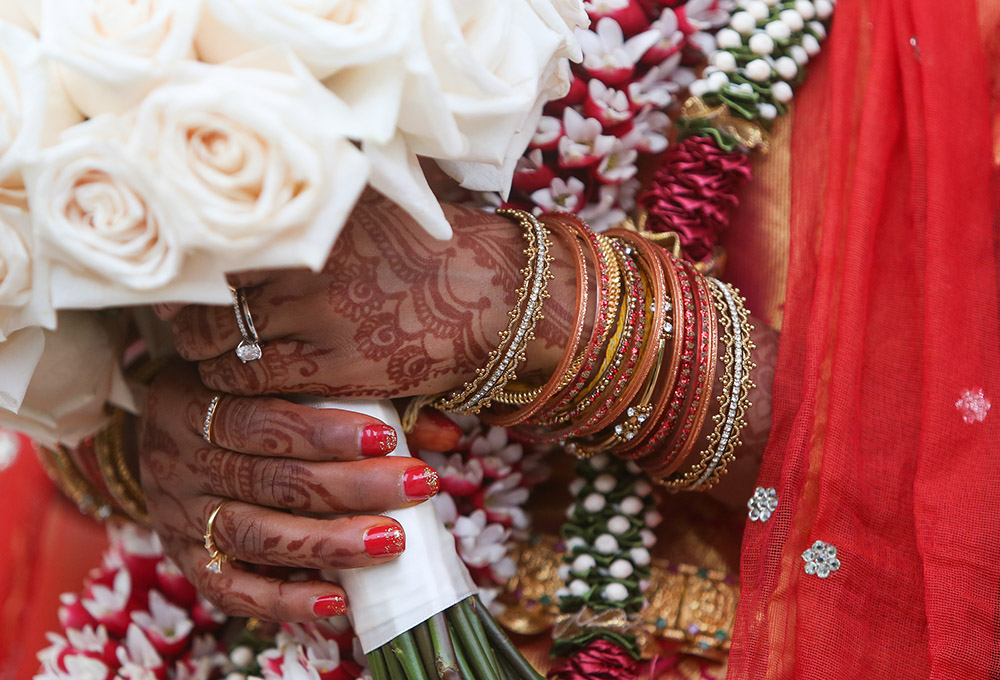 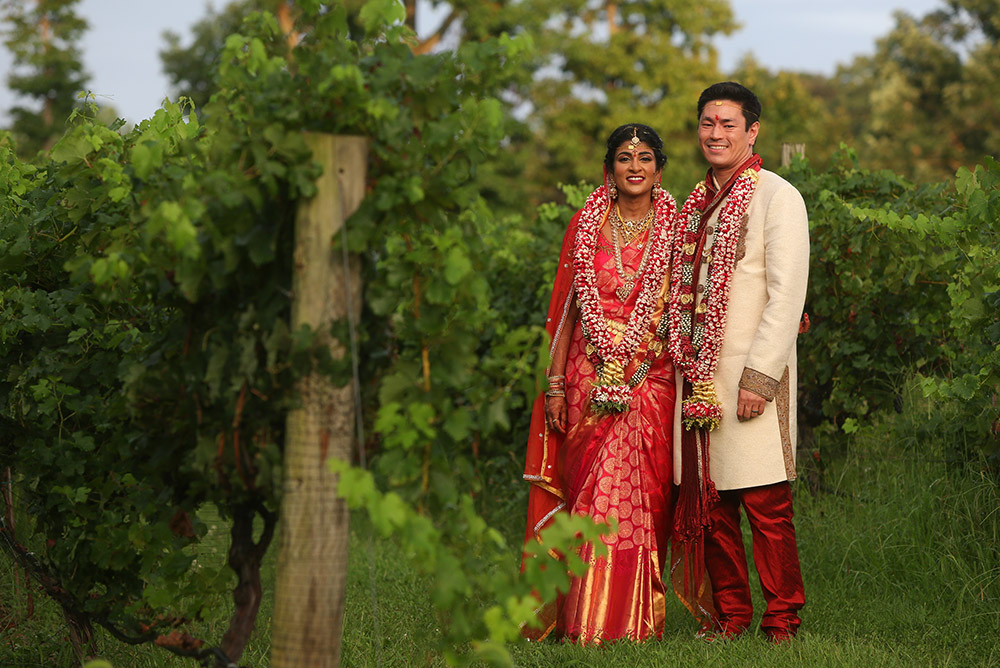 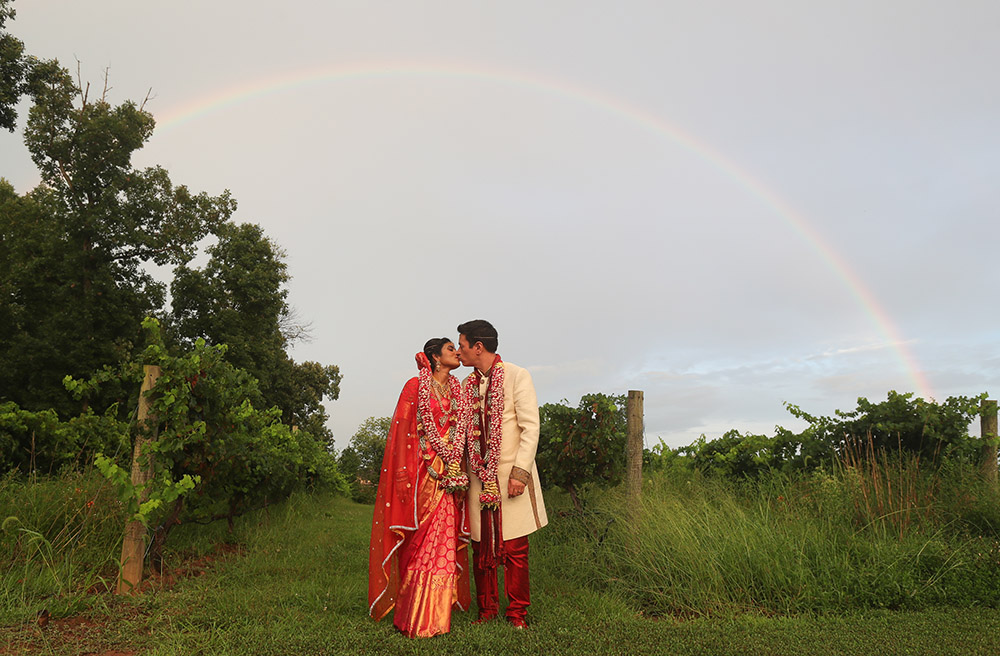